The regular Tuesday night team meeting began as the architects and engineers started off the class period in separate rooms. Faculty Advisors Amy Gardner and Julie Gabrielli met individually with the architecture students providing one-on-one feedback on drawing assignments. Mentor Dan Vlacich gave a presentation in the neighboring room to the engineers on electricity and discussed the electrical system in the 2005 Maryland House.

An hour later, the full team reconvened to present small group reports. This was the first collaborative assignment of the fall semester between the architects and engineers.

The previous week, LEAFHouse faculty advisors assigned team members to 13 small groups, encompassing the ten Decathlon contests and three additional house-related subjects. Each team was asked to produce a presentation to explain “How We Won Solar Decathlon 2007” and in particular, how the LEAFHouse won that particular contest.

Students analyzed the 2005 Maryland house, read post-event reports from old Maryland team members, sorted through the scores and subjective contest summaries from 2005, investigated the systems performance of each 2005 Decathlon home and poured over Department of Energy raw data from the 2005 Decathlon for their research.

The Tuesday night class discussion took the premise that team Maryland had won the 2007 Decathlon and each group had to explain to a journalist the team’s winning strategies.

Many of the small groups provided practical suggestions to win the Decathlon, such as having documentation backing up each design decision to designing the mechanical systems to control humidity. However, some groups also threw in a few outrageous ideas such as using wind turbines (banned by the competition rules) and using nano-photovoltaic fabrics (not on the market). This provided a lighthearted dialogue and many laughs during the group discussion.

The end result of the Tuesday night class was the framework for a plan to win the 2007 Solar Decathlon and a team knowledgeable of what it takes to be competitive. 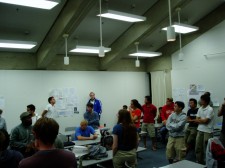