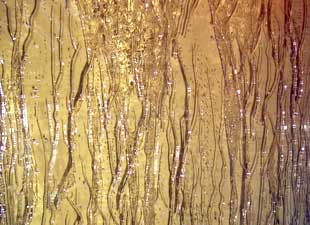 Until the mid twentieth century, a house cooling system meant ... a fan, and before that, a window. The key difference between a simple fan and an air conditioner is dehumidification -- an important distinction, because, as the saying goes, "it's not the heat, it's the humidity" that makes Washington, D.C., area residents uncomfortable in the summer.

The problem with air conditioners is that they are energy hogs.  A conventional air conditioner uses a pump to compress and expand a refrigerant, supercooling the air and causing the water vapor in the air (the humidity) to condense (become liquid).  It dumps the collected water outside. This takes a lot of energy and generally it can only be done with electricity.  Electricity is generally a lot more expensive to create than heat, for example, making conventional AC cost more too.

The LEAFHouse team is exploring a technology relatively new to single-family home design called a Desiccant System. This concept has been proven sound on larger buildings.  The basic idea is to use a material called a desiccant (in our case a type of salt called calcium chloride) to absorb water directly from the air without all the complicated machinery and energy requirements of conventional AC.  As the desiccant absorbs water, it becomes diluted and its ability to dry the air declines. The desiccant needs to be regenerated.  This can be done by simply heating up the desiccant and letting the water evaporate to the outside air.  Thus, the desiccant is concentrated and ready to return to its job of drying the indoor air. LEAFHouse uses heat from the Solar Hot Water collectors to regenerate the desiccant.  Remember that heat is a lot easier and cheaper to make than electricity, so this is a BIG improvement over conventional AC for dehumidification.

Most commercial systems use a solid desiccant. LEAFHouse has taken the innovation of desiccant systems a step further by using a LIQUID desiccant.  We believe this will make the system safer, easier to maintain, and cheaper too.

True to our philosophy of integrating technical and aesthetic goals, we have chosen not to hide the Liquid Desiccant Waterfall (LDW) system, but to make it a beautiful and functional indoor 'water feature'. Likewise, the regenerator is a prominent techno-sculptural element that will greet visitors on the Mall as they approach the front door to the house.

In summary, the dramatic Liquid Desiccant Waterfall removes humidity with very little energy, greatly reducing the job of the air-conditioner (used only for cooling). Calcium chloride, a highly absorptive salt, is mixed into the waterfall, where it captures moisture out of the air. Heat from the solar hot water collectors is used to regenerate the desiccant.

D.C. residents know that humidity, not necessarily the heat, makes the summertime sticky and miserable.