So how do we change our DC to AC so we can use it in our home? We use an inverter. The inverter takes in DC electricity and makes it into AC electricity, with 93% efficiency. Like a charge controller, an inverter is mostly circuitry with no moving parts, so it is also maintenance-free. 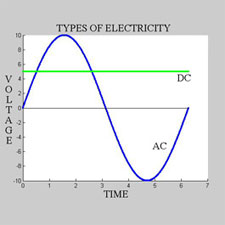